The Double-crested Cormorant (Phalacrocorax auritus) is a member of the cormorant family of seabirds. Its habitat is near rivers and lakes as well as in coastal areas, and is widely distributed across North America, from the Aleutian Islands in Alaska down to Florida and Mexico. Measuring 70–90 cm (28–35 in) in length, it is an all-black bird which gains a small double crest of black and white feathers in breeding season. It has a bare patch of orange-yellow facial skin. Five subspecies are recognized. It mainly eats fish and hunts by swimming and diving. Its feathers, like those of all cormorants, are not waterproof and it must spend time drying them out after spending time in the water. Once threatened by the use of DDT, the numbers of this bird have increased markedly in recent years.

This species has dark-colored plumage with bare super-loral skin and gular skin that is yellow or orange. An adult in breeding plumage will be mostly black with the back and coverts being a dark grayish towards the center. Nuptial crests, for which the species is named, are either white, black or a mix of the two. These are located just above the eyes with the bare skin on the face of a breeding adult being orange. A non-breeding adult will lack the crests and have more yellowish skin around the face. The bill of the adult is dark-colored.The double-crested cormorant is very similar in appearance to the larger great cormorant, which has a more restricted distribution in North America, mainly on the Canadian maritime provinces; it can, however, be separated by having more yellow on the throat and the bill.

The plumage of juvenile double-crested cormorants is more dark gray or brownish. The underparts of a juvenile are lighter than the back with a pale throat and breast that darkens towards the belly. As a bird ages, its plumage will grow darker. The bill of a juvenile will be mostly orange or yellowish.

The double-crested cormorant swims low in the water, often with just its neck and head visible, and dives from the surface. It uses its feet for propulsion and is able to dive to a depth of 1.5–7.5 m (4 ft 11 in–24 ft 7 in) for 30–70 seconds. After diving, it spends long periods standing with its wings outstretched to allow them to dry, since they are not fully waterproofed. This species flies low over the water, with its bill tilted slightly upward, sometimes leaving the colony in long, single-file lines.

ood can be found in the sea, freshwater lakes, and rivers. Like all cormorants, the double-crested dives to find its prey. It mainly eats fish, but will sometimes also eat amphibians and crustaceans. Fish are caught by diving under water. Smaller fish may be eaten while the bird is still beneath the surface but bigger prey is often brought to the surface before it is eaten. Double-crested cormorants are also considered pests to aquaculturists because of their intense predation on fish ponds which can cause thousands of dollars in losses to farmers. 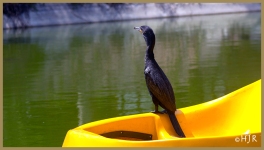 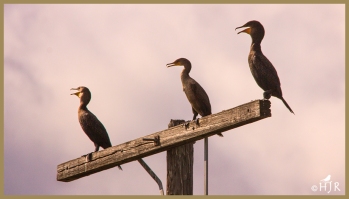 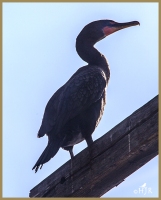