The Eastern Towhee (Pipilo erythrophthalmus) is a large New World sparrow. The taxonomy of the towhees has been under debate in recent decades, and formerly this bird and the spotted towhee were considered a single species, the rufous-sided towhee.

Their breeding habitat is brushy areas across eastern North America. They nest either low in bushes or on the ground under shrubs. Northern birds migrate to the southern United States. The song is a short drink your teeeeea lasting around one second, starting with a sharp call (“drink!”) and ending with a short trill “teeeeea”. The name “towhee” is onomatopoeic description of one of the towhee’s most common calls, a short two-part call rising in pitch and sometimes also called a “chewink” call.

The eastern towhee is a large and striking species of sparrow.

Adults have rufous sides, a white belly, and a long dark tail with white edges. The eyes are red, white for birds in the southeast. Males have a black head, upper body, and tail; these parts are brown in the female. Juveniles are brown overall. Eastern towhees of all ages and both sexes generally are unmistakable and are not known to co-exist with the similar western spotted towhee. 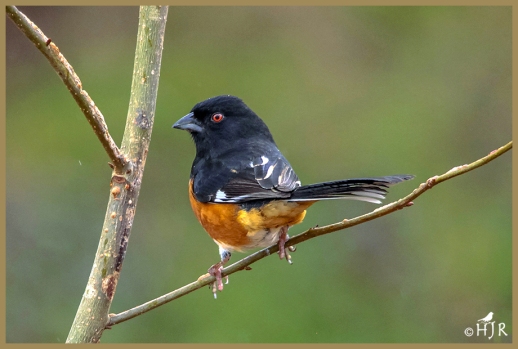